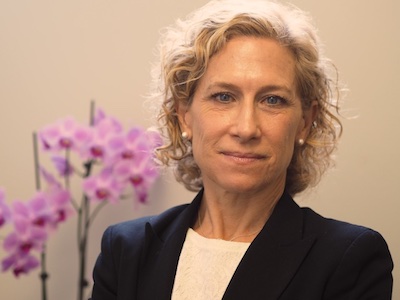 “I was at a family reunion recently and told a cousin, who I hadn’t seen in almost 20 years, about my job as Director of Steps to Justice. She smiled and said, “You’re doing exactly what you said you wanted to do when we saw each other last time.” It made me pause and realize that indeed that was true!”

“I got into the domestic violence field a little bit by accident but I have remained in it with a strong sense of purpose.  As an undergraduate, I participated in Northwestern University’s Chicago Field Studies program where I took a sociology class about organizational management in the non-profit sector. Because I was interested in women’s issues and law, I was placed in an internship at Pro Bono Advocates, an agency that recruited private attorneys to represent “battered women” in civil cases for free. I’m not sure if I had ever heard of domestic violence but whatever I knew was surely just mistaken stereotypes.  There, I learned about the dynamics of abusive relationships, the difficulties of managing the legal system, the lack of resources. And I met survivors with unforgettable stories and unimaginable resilience. I knew then that this was work I was meant to do.”

“After law school and a clerkship, I became a Middlesex County Assistant District Attorney in the domestic violence unit, where I prosecuted abusers. The criminal justice system is a powerful tool in the fight against domestic violence. On a very concrete level, abusers are held accountable for their crimes and in addition to being punished, they can be ordered to undergo treatment such as a batterer intervention program, anger management course, substance abuse counseling and monitoring by a probation officer. On a more conceptual level, prosecuting abusers is a powerful statement that the community condemns the behavior and that it is the responsibility of the state to punish it.  All criminal matters are titled “Commonwealth vs. ____________.” Contrary to the anachronistic idea that domestic violence is a private or family matter, something that happens and stays behind closed doors, prosecution of crimes of domestic violence are a matter for the public domain; the harm extends beyond those who are hurt.”

“However, there are practical limitations to relief offered through the criminal courts. For example, if an abuser loses his job because of a conviction or jail sentence, the survivor may have no income or child support. And, in or out of jail, the survivor is often still tethered to her abuser. I began working at The Second Step because I wanted to help survivors address the myriad of legal issues they face as they begin to heal and rebuild: divorce, custody, child support, immigration, housing, etc. As a survivor works with a TSS advocate to set goals, I can help her take the legal steps necessary to make some of these plans a reality.”

“Since I started working in the domestic violence field I have seen monumental changes in laws, awareness and attitudes: mandatory arrests for restraining order violations; new crimes of strangulation and assault and battery on a family member; legislation protecting the rights of survivors in housing and the workplace; the development of trauma informed advocacy; a designated Domestic Violence Awareness Month are a few examples. The stigma has lessened, and more than ever, victims and survivors are able to label their experiences, seek help, and take steps toward a safe future. But still I see survivors struggle to access legal services, struggle for understanding and relief from the court system, and struggle for fair results and judgments.”

“I would love to be out of a job! I hope – and believe — one day, domestic violence will be eradicated and there will be no need for The Second Step. Until then, my colleagues and I will continue advocating for clients, standing by them as we take ‘steps to justice.’”