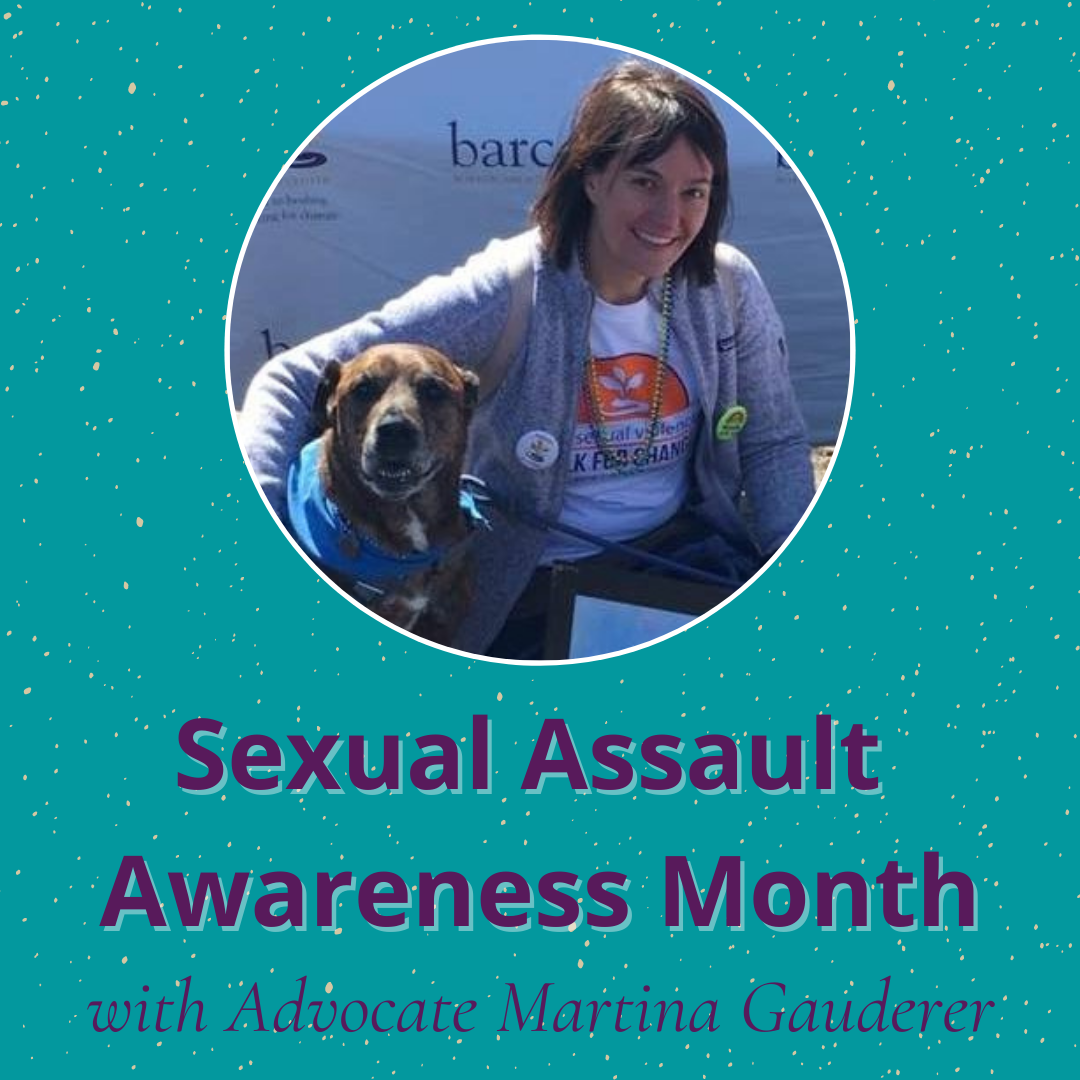 As we close out Sexual Assault Awareness Month (SAAM), The Second Step honors the history and legacy of those who have shaped the movement to end sexual violence. Domestic Violence Advocate, Martina Gauderer, shares her connection to SAAM and how she finds power and healing in community:

April is Sexual Assault Awareness Month (SAAM) and this year marked the 20th anniversary of its inception. The roots of SAAM run deep and the movement to end sexual violence cannot be extracted from the movement to end domestic violence. For this reason, The Second Step honors SAAM and sees it as both an opportunity to spread awareness of sexual violence within intimate partner relationships, discuss prevention (communication, boundaries, consent), and give survivors the time and space to bring voice to their experiences of sexual violence. This might include the experience of sexual abuse as children which can often lead to abusive relationships in adulthood, single-incident sexual assault, sexual harassment, or ongoing sexual abuse and assault or marital rape within an intimate partner relationship.

We believe there is power in numbers. This is what the “MeToo” movement against sexual abuse and harassment started by survivor and activist Tarana Burke is all about. “MeToo” empowers a growing spectrum of survivors through solidarity and empathy by visibly demonstrating how many have experienced sexual violence. The message of “MeToo” goes against everything survivors have historically been told to believe about abuse—that is, those who experience sexual violence are not responsible no matter what. People who violate physical and sexual boundaries and use sex as a means to gain power and control are.

As domestic violence advocates, we talk about power and control within intimate partner relationships as best explained through the Power and Control Wheel—a tool we utilize to understand the tactics that abusers use to gain power and control over another person. This wheel, rooted in feminist theory, was developed in 1984 by Domestic Abuse Intervention Programs in Duluth, MN and is instrumental in starting many important conversations with survivors. I have found this particularly true when it comes to sexual violence within intimate partner relationships. Many survivors might have a harder time identifying sexual abuse/assault when it has happened within the context of an intimate partner relationship than they do other types of abuse. This goes back to the shame factor that is deeply rooted for many survivors who may have previous experiences of sexual violence, been taught that talking about sex is taboo, or been disbelieved or even blamed for being violated in a sexual way at any point. It can also speak to conditioning and, for me, is a deeply political issue. So many women in particular have been taught and have internalized that sex within an intimate partner relationship/marriage is obligatory, that it is not a choice, and even that it is impossible to be raped by a partner/spouse. This is, of course, false.

As a survivor of sexual and relationship violence myself I have an especially strong connection to the issue of sexual abuse, harassment, and rape being used as a means of power and control. I come to this work from a place of mutuality and a deep intuitive knowing—not just as a professional sitting across from someone that’s been abused, but as a “MeToo”. That’s why I am passionate about sexual violence awareness and education within the framework of what we do as domestic violence advocates and why I believe it is critical to talk openly about the topic when we discuss relationship violence. I always center the experience of a sexual abuse/rape survivor, perhaps because I am one, but also because after over a decade of doing this work I have consistently witnessed people question, minimize, self-shame, and deflect the topic of sexual assault within relationships. So, we have to start by normalizing the conversation.

My feminist and anti-sexual violence activism began many years ago when I began offering outreach, education, and support to my community as a volunteer at a rape crisis center. This is where I found my voice as a survivor and discovered the power of using one’s voice, creativity, and passion to bring survivors together in the name of healing and change. This is also where I put down my roots as an advocate in the field of domestic violence, a field that’s history shows that there is indeed power in numbers and in survivors speaking truth to power.

Advocates seek to provide a place of safety for survivors to help them stabilize, share their stories, and ultimately to become empowered. That empowerment can lead to lasting change, something I am privileged to witness all the time in the work that I do. Survivors are the leaders, like Tarana Burke of “MeToo”, of this movement. We are the movement. We are everywhere and we belong everywhere where decisions are being made about our lives, about the epidemic of sexual violence, about justice. The larger movement of domestic and sexual violence is fueled by every person who has the courage to call an advocate, to sit with one, to ask the hard questions, to lean into the discomfort, to say “me too”. It is fueled by every person who makes it a point to acknowledge sexual violence awareness all year long and to show in the many ways one can that survivors are seen, heard, believed, and honored. Ultimately, it’s about taking ones power and control back for themselves, something that takes time and requires courageous work, and turning it into something beautiful and inspiring.

However you identify—survivor, advocate, friend or family member, or some combination—you are called upon during SAAM and all year long to make an impact in the move to end sexual violence. It may be something as simple as a social media post, saying “me too” or offering a nonjudgmental and brave space to just listen, writing a letter to yourself or a survivor in your life letting them know that their story matters. Or, it could be offering your time or resources to an organization that is centering survivors every day—your local domestic violence agency or one of the several larger national organizations fighting to create communities free of sexual violence.

There are the devastating facts about sexual violence both out and inside of intimate partner violence. It is dark. But what we also know to be true is that speaking truth to power, giving survivors a platform, and building a growing survivor community has remarkable potential for individuals and for the world. Each story is a tiny flame of truth that collectively lights the way towards healing and change. And as SAAM comes to a close we ask that every survivor, every advocate, every community member continues to hold the stories that all too often go untold, those hidden from plain sight, those yet to be brought into the light. Reach out to an advocate, be an ally, give and know that every effort you make in the name of ending sexual violence matters.

Previous PostPlant a Seed: Stories of Strength Next PostTake Pride with The Second Step